Going Back into the Dungeons 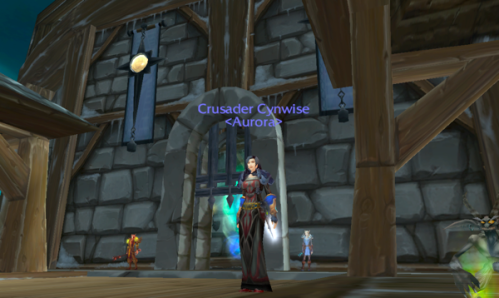 I have never been one for dungeons in the World of Warcraft.

I ran very few instances while leveling, and those few that I did try either were featured episodes of PuGs Gone Wrong or caused me to pull spouse aggro so hard that I considered shelving the game entirely. The only dungeons and raids I would do were guild runs, and even those were white-knuckle affairs.

It’s somewhat ironic that I started off playing swearing that I did not want to PvP, but those bad early dungeon runs drove me into the battlegrounds and caused me to swear off PvE.

But you know what? Neither extreme is heathly. Warcraft is wonderfully diverse in how you can have fun; limiting that fun because it’s not what you’re used to or comfortable with is really your problem, not the game’s. Or, in this case, my problem.

So when the Trial of the Champion was announced, what with its sweet, sweet loot and delicious, shiny Champion’s Seals, I knew I was going to try it, and even PuG it, just to see if I could.

And I’m really glad I did. I’ve been running heroics on a pretty regular basis and have even set up a raiding spec and gear set which is slowly filling out. Practice in the Argent Tournament has paid off, and I no longer avoid dungeons like the plague.

But there were some rules I had to learn on the way.

THE TRIAD OF BLAME

I’ve seen the triad of blame posted a lot in the forums, but it’s worth revisiting if you’re considering getting into some dungeons.

While it’s couched in terms of blame, this is really all you need to know about threat and aggro.

As a DPS class, I have taken that last bit to heart. If you pull aggro from the tank, it isn’t because the tank is bad. It’s because you didn’t manage your aggro. This is true especially if you have a bad tank! Using Omen to measure threat is a strange and foreign concept to a PvPer, but you have to do it. You have to hold back on your damage until the tank has built up threat, and every tank is different.

One of the best pieces of advice I’ve gotten on Twitter to tell what kind of tank you’re dealing with is to hit the first trash mob pull as hard and as fast as you possibly can. How the tank responds to this pull will tell you how much restraint you’re going to have to have on the bosses later on.

The TotC, lacking trash pulls until the second boss, isn’t really ideal for this advice. But hitting the first boss really hard does give a good idea how the rest of the run is going to go.

Unlike a battleground, where you can do pretty much everything right and still get facerolled, dungeons are straightforward: don’t do the stupid things that get you killed.

Just like Omen, you can and should get an addon like Deadly Boss Mods to help make sure you don’t do the stupid stuff.

All of this comes down to two things, really.

Keep those tips in mind and those big bad PvE bosses won’t seem quite so bad anymore.

5 responses to “Going Back into the Dungeons”