Gearing Up For Battlegrounds 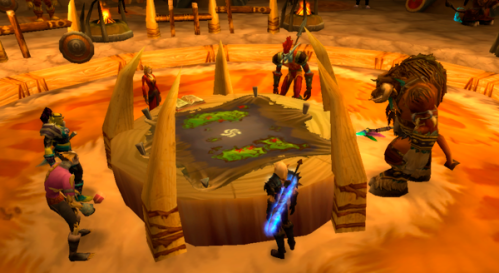 If you are going to be spending a lot of time in the battlegrounds of Azeroth, you should dress for success and get some PvP gear. Even a few well-chosen pieces can improve your performance and survival – and they’re often good pieces to level with, too. But gearing up for PvP can be a complicated affair, particularly for the uninitiated.

In all likelihood, unless you are a Warlock I’m not going to be able to give you a specific shopping list of gear to go get. That’s okay; you should know the gear requirements of your class better than I do. But, much like battleground talents, there are some general guidelines for battleground gear that transcend class.

You should choose gear on a familiar set of three principles:

Unlike levelling gear, which should at least have a nod towards efficiency, and raiding gear, which for everyone (except tanks) favors output over everything else, battleground gear has to keep you alive so you can do your job. You will sacrifice a lot of output as a tradeoff for survival. That’s okay; nobody looks at your DPS/HPS in a battleground. Just stay alive and do your job.

To illustrate, let’s take a look at Warlock stat priority between the three gear types.

The leveling gear should give you enough hit so you don’t miss too many mobs, but not so much that you sacrifice stamina or spellpower for it. Intellect is present to increase your mana pool, but so is Stamina, because of Life Tap. I imagine that mages flip that priority and favor Intellect over Stamina, but nearly all casters can use “… Of the Eagle” gear. This gear will let you quest with litte to no downtime and have sufficient punch to deal with mobs you encounter on the way.

The most important stat to a raider, however, is Hit, specifically enough Hit to never miss an endgame boss. Once this Hitcap is reached, Hit is worthless and it’s time to do damage. Each build has different DPS coefficients for each stat, but spellpower always wins. Spirit is more important than either Stamina and Intellect because Fel Armor turns it into damage.

Obviously, this gear priority is designed to do one thing really well — bring down level 83 bosses quickly.

Battleground gear doesn’t bring the heat to a boss like raid gear. It has just enough Hit to get equal-level opponents (4%) with racial or class evasion abilities (+2%) factored in. But once that PvP hit cap is established, it focuses on reducing damage with Resilience, creating a large pool of hit points with Stamina, and then overcoming resistances with Spell Penetration. Only once Survival and Control are established is attention paid to increased damage and Output.

I’m going on at some length on the principles with this example because I don’t know what your specific needs will be. If you are looking for some casual battleground fun while leveling, specific numerical targets are irrelevant. Just pick up some pieces with Resilience and Stamina and go to work. If you’re a level 80 caster working on a complete PvP set, though, I can tell you to shoot for 800 Resilience, 158 Spell Hit, 75 Spell Pen, and 20k hit points before working on your spellpower.

If you need help figuring out what you gear goals are, there are two places that can help. First, visit the PvP vendors in-game and see what kind of gear they sell for your class. While not infallible, this at least can get you used to the stats Blizzard thinks are acceptable. Second is to look on the internet at sites like Arena Junkies to see what other PvPers are doing.

Do a little research and set your gear goals first; it will help make decisions easier later.

I hear it in chat all the time — where do I get PvP gear? Gearing up for battlegrounds is somewhat different than gearing up for raids, but only in execution, not philosophy. You improve your gear through crafting, reputation grinding, and playing battlegrounds.

As of 3.2, the current acquisition path is:

As your character grows, you’ll want to focus on different pieces.

First, while leveling you’ll have the opportunity to purchase PvP pieces from vendors stationed outside the various Battlegrounds in Azeroth. These pieces are generally good, but like all pieces gathered in leveling, quickly outgrown. They cost Marks of Honor from the various battlegrounds, and some honor. The vendors are:

There are some good items you might consider getting. The Highlander’s Boots have a built-in speed enchant and can also take a riding speed enchant, making them great riding and town boots. But in general, if you are not twinking at one of these levels, these items should only be considered if you want to avoid the Auction House for some green upgrades.

At level 60, more pieces open up with the Rare and Epic level 60 sets. You should get these for the looks, not for the stats, because at level 58 you walked through the Dark Portal and picked up greens in Hellfire Peninsula that blow these pieces away. The Rare level 70 sets are also quickly outmoded by Northrend quest greens, and don’t even look as good.

However, if you look around the Hall of Champions (Alliance) or Hall of Legends (Horde), you will find Rachel Vaccar and Teena, purveyors of Season 4 Arena gear for level 70s, which will also cost you honor and Marks of Honor. Some of this gear is quite good. Casters should consider the Volanthius Shroud — good cloaks are hard to come by, and it’s a good one. Many of the trinkets are also exceptional for leveling.

If you have the means, these are good upgrades to go for. Each one of these sets has a Stamina and Resilience bonus and can be crafted by the various crafting professions. They are sets for both PvE and PvP at level 78 through 80, and are a good starter set for PvP at level 80.

Once you get to level 80, you no longer have to worry about outgrowing your gear and can set your sights on assembling a full set. Honor Points are now your currency of choice, with one exception which we’ll get to later. If you’ve been doing a lot of Battlegrounds, now is the time to turn those Marks of Honor into Honor Points so you can go to town.

Your first goal is upgrading to last season’s Arena set, the Hateful/Deadly set. At first, you’ll want to get the Hateful gear (ilvl 200) to replace your main outfit and Deadly gear (ilvl 213) for rings, trinkets, bracers, neck, and boots. Pay attention to set bonuses and differences in item Equip abilities; often the gloves will have unique abilities and should be gotten first. If you are also running Heroics at this time, you now (as of 3.2) have the option of purchasing Deadly versions of your main gear for Emblems of Conquest. You should stop and think before going full Deadly, however.

While working on getting enough honor to buy your Hateful/Deadly set, you should also be playing as many Wintergrasp games as you can. The reason is because of the items available from the Wintergrasp Quartermasters: Titan-Forged gear. Titan-Forged gear is often the same item level as Deadly gear (213), but is itemized for Haste or Hit instead of Crit. It is also very easy to get, just requiring Wintergrasp Marks of Honor to get. And it’s the key to a well-rounded PvP set.

Remember that discussion about knowing what stats you need to be successful in battlegrounds? Titan-Forged gear helps you reach those stats. While you can go full Hateful/Deadly and get some pieces with Hit, they all favor Crit over Haste. This can be good for some builds, but not all. You need to know which stats serves your specific build best and build accordingly.

My recommendation is to start out with 4 pieces of Hateful and 1 Titan-Forged piece, adding more Titan-Forged pieces as you go. The trinkets are also an excellent way to gain resilience and should be purchased. This gives you the opportunity to experiment with your set bonuses while also getting some very good gear.

One last note about the Titan-Forged gear. With the release of the Argent Tournament (3.2), several new items were added to the Wintergrasp Quartermasters: ilvl 232 pants and ilvl 226 bracers and rings. These are equivalent to the current top-level Arena Furious Gladiator gear, and should be gotten first. They are great pieces to build your set around.

Finally, we consider Arena gear. The Furious Gladiator gear can only be purchased with Arena points, and with specific personal or team ratings. Success in the Arena is the only way to get PvP-oriented weapons, and they are outstanding ones.

If you are Arena-shy you will have to look elsewhere. Crafted weapons like the epic Titansteel weapons (I used the Titansteel Spellblade for some time) or Inscription off-handers are good choices. So are reputation rewards, like those available at the Argent Tournament quartermasters. PvE Heroics like the Trial of the Champion have fantastic drops, too. If you don’t like Arena don’t beat yourself up trying to get a good PvP weapon — just get a good PvE weapon and move on.

Once you have all this great gear, don’t forget that you have to enchant and gem it. Knowing your gear priorities will determine which specific ones you will get, but since Resilience is important to all classes I should point out the head enchants from Wintergrasp (the Arcanums of Dominance and Triumph, respectively) and the Greater Inscription of the Gladiator from your faction’s quartermaster as worthy enchants. This is the part that gets expensive; make friends with an enchanter and jewelcutter if you can.

I’ve had a full Hateful/Deadly set for a while now, and I think it’s important to not get too comfortable with your gear. Each patch has brought new items, new itemizations, and adjustments to the gear. Soon we will see Furious Gladiator’s gear start appearing at vendors for honor points instead of Arena points. Having clear gear goals and meeting them is more important than any single gear upgrade. Keep them in mind and you will not go wrong.

Tagged as Gear, Wrath, Wrath of the Lich King

13 responses to “Gearing Up For Battlegrounds”