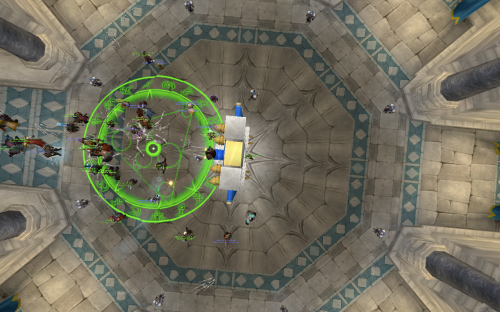 I still remember the first time I saw a Frost Mage AoE grind. It was in northern Dragonblight, up at the Scarlet Crusade base. This little gnome would round up the Crusaders into a tight herd on his mechanostrider, slow them, freeze them, blink to a safe distance, and then annihilate them with a Blizzard. This crazy little man would pull entire camps, kill them all, and ride away without a scratch.

I was stunned by not just the carnage, but the sytle and élan by which it was achieved. I admit: I was really quite jealous of Mages in that moment.

What I didn’t know at the time is that Warlocks are equally capable at AoE grinding, but with a fundamentally different style. The Warlock Way isn’t to avoid the enemy, it’s to frustrate their attempts to stop us, to turn their own life force against them, and when all else fails — to nuke them down while we laugh at their feeble attempts to stop us.

There are at least four styles that I know the different specs can use to kill many mobs in a single blow.

Today I’m just going to talk about Destro’s AoE grinding. The core idea is to gather up the mobs with you (and your pet), hit them with Shadowfury, Shadowflame (especially Glyphed Shadowflame), and Rain of Fire, all while absorbing damage with your Voidwalker’s Sacrifice, Soul Link, and your own high Stamina. The more defensive talents you have, the better you will fare.

The process is relatively straightforward:

Sometimes it helps to actually see a technique in action.  So, I made a little video to show how this works in practice.  (Go easy on me, this is my first video post.)

So there you have it.  Obviously Warlock AoE grinding takes some practice and a good health pool.  Soul Link will really help you out here, but it’s by no means essential.  What is essential is keeping a good tab on your cooldowns, health, and mana, and the willingness to adapt when things go wrong.