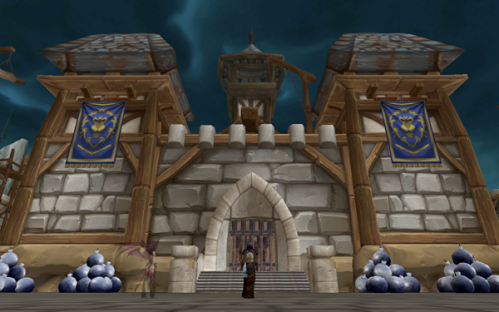 So, yes, I’m still on vacation, but this is some pretty exciting stuff. Wowhead has an article on upcoming changes to the battleground system in an upcoming minor release, most likely 3.3.3. Go visit that link for the full blue post first, then back here for a few comments.

NO MORE MARKS OF HONOR

Everything I just wrote about Marks of Honor? Valid only through the rest of this minor patch. After that, all marks are going away and items that require them will be replaced with honor points.

I like this change. Marks are confusing and the conversion mechanism is clumsy. While I’d like to see how this is implemented (will you need certain reputation levels to buy WSG/AB/AV items? How will turnins for leftover marks be handled once they are no longer awarded – will you still have to match all six, or can they be turned in individually?) I agree with the developers that the Marks system has outlived its usefulness.

One big, glaring question: will Wintergrasp marks also go away?

Oh my yes. I’ve written about this before, so I’ll just say: thank you, Blizzard. The DF has been a huge success. I hope the BGF will be too.

There are several interesting changes in the notes about the rewards for Holiday Weekends and Random Battlegrounds. The rewards are equal, so that doing randoms offers no better or worse benefits than fighting the holiday weekend battleground, now confusingly called the Call To Arms battleground. (Confusing, because that’s the name of the daily BG quest).

On the one hand, this is good because it makes for a clear set of bonus rewards. Your choices are simpler when grinding honor: random or CtA.

(Hint: when WSG is the CtA battleground, run randoms. When AV is CtA, run AV.)

The biggest question I have here is about the daily Call To Arms quest that is in the game. I speculated that this would go away with a random BG finder, much like the daily heroic quest did. And having holiday weekends renamed to Call to Arms implies that it’s gone. But what about the Arena points we were getting from that quest? Are they going away too? If so, how will that effect gearing?

My suspicion is that they are, along with the quest, but I’m honestly just guessing at this point.

Having recently dived into the bonus honor systems for Alterac Valley and Arathi Basin myself, the changes they’re making to the HK/Honor ratio and quest/bonus rewards don’t seem that scary. Quest rewards should remain net neutral, while overall honor gains from fighting will go up. There are interesing implications from this change, but nothing to panic over.

Currently, an honorable kill grants 20.9 honor points. The new system should double that to 41.8 points, which is nice. This raises the value of engaging the enemy in combat and has huge implications for many battlegrounds: the Alterac Blitz, midfield fighting in Warsong Gulch, even opening a debate about bringing down the towers in Wintergrasp. Sustained fighting might become more optimal than quick wins… but if everyone is getting 625 honor for a quick win from the CtA/RBGF bonuses, they may not care.

Another effect we’ll see is that the relative impact of completing the weekly quests in WG lessen, so that subsequent battles aren’t so… lackluster in their rewards. This should encourage players to keep up with WG after Tuesday/Wednesday.

Losing the random/CtA battleground will award 5 kills, or 209 honor points.

Considering when you’re getting completely owned in a fight you might walk away with less than 50 honor, this isn’t bad. It’s a slight downgrade from the value of a Mark of Honor (248 honor), but the hassle is less, too.

The tradeoff is really in the immediate utility of honor points versus the delayed value of a Mark; you can keep going in a high-value battlegrounds without having to stop and switch to 5 other venues to get that honor.

Math. We’re going to need lots of math for this next patch.

Update 2/19: More news from the blues, this time about Wintergrasp.  These changes don’t appear to be anything radical, to be honest, just some tweaking of the existing internal balance we’d all suspected had been there all along.  It’s nice to have confirmation that the siege zergs are not an exploit, though.

16 responses to “Upcoming Battleground Changes in 3.3.3”