Forget about the awesome PvP abilities of some of these hybrid classes. Who needs Enhancement Shamans powering a node’s defense, Retribution Paladins dominating front-line combat, or Shadow Priests destroying swaths of the enemy? Never mind that Feral Druids are some of the best flag runners and node cappers in the game!  If those players want us to win they should be healing!

Do you see how silly this attitude is?

This ridiculous strawman what happens when you take an observation – healers win battlegrounds – and turn it into a prescription – everyone who can heal, should. Carried to this extreme it becomes patently absurd.

Yet, even though it is absurd, you’ll hear well-meaning people say it. I’ve probably even said it once or twice.  But the scarcity of healers is no excuse for pigeonholing players into roles they either choose not to play, or frankly aren’t very good at. 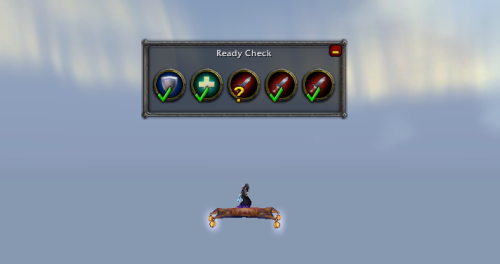 The source of the problem lies in the lack of defined roles in a battleground. You don’t select Healer, Damage, or Crowd Control when queuing for a battleground – you just show up. Random chance governs your healing team, if you get one at all. So when you look around at the class compostion of your team, you see the potential healer pool. The actual team is far smaller.

Battleground raid roles are not as simple as PvE raid roles.  The Tank-Healer-Damage trinity simply doesn’t apply to PvP, and is instead replaced by situational roles for each battleground.  Within the smallest battleground, Warsong Gulch, I can think of a dozen roles in two different configurations.  Zone coverage would be broken down into Flagroom Defense, Midfield / Offensive Support, and then Offense / Flag Carriers, each subdivided into Control, Damage, and Healing.  Or you could abandon zones and go with task-based role assignment: Flag Carrier, FC Support, Midfield Control, EFC Hunters.

However, trying to communicate these kinds of complex role assignments to a random PuG before a battle is madness.  The reason Simple Battleground Strategies work is because they present a way for your team to work together quickly, easily, and independent of raid composition.  Unfortunately, that simple way of thinking bleeds into how we consider healers and healing-capable classes because there is no refinement within them to consider the other roles a hybrid class can play in the battleground.  Good hybrid players go and perform those roles within the structure of the simple strategies anyways, but it would be nice if we started seeing more refined roles that didn’t just go “Healer / Not Healer.”

I think that the introduction of Rated Battlegrounds in Cataclysm will have a dramatic impact of how we think about our strategies.  PuGs are still going to happen, but I really expect to see more battlefield organization through guilds and general PvP alliances.  The incentive to organize is going to be there, so people will be thinking deeper and longer about how their players should work together and the roles they fill. This is really exciting.  We could be on the cusp of a renaissance of battleground strategies as more players get involved.

We could also be on the verge of losing one of the great charms of battlegrounds, namely the casual, laid-back nature that appeals to many busy players now.  PuGs facing premades can be very frustrating for those on the disorganized side.  Sometimes, you don’t want something serious, you just want to go pwn some Horde or Alliance, and having to execute a complex strategy is not how you want to unwind.  My biggest fear with the introduction of Rated Battlegrounds is that the casual aspect of bgs will be lost.  I am holding judgement until we see more about the implementation, and see how that implementation changes people’s playstyle.  It has tremendous potential both for good and ill.

There’s an unfair expectation on hybrid classes to heal in battlegrounds right now.  My hope is that Rated Battlegrounds will bring about a greater recognition and respect for the other specs those hybrids bring to your team, and that those healers who are there are playing because they enjoy it, not out of some sense of obligation or guilt.

Only time will tell if that hope will bear fruit.

39 responses to “Healers and Battleground Roles”