A Different Kind of Battleground Map

In 1931, Harry Beck created the first version of his revolutionary map of the London Underground. Instead of accurately overlaying the train routes over a geographic map of London, Beck presented the topology of the Tube, divorcing it from the complicated, messy reality of the physical world and giving the logical connections between stations instead. This innovation has been rightly copied on metro transit maps throughout the world — presenting the flow of bus routes or subway systems is much more useful to a traveler trying to find the right line and stop than knowing where those lines and stops are in relation to the real world.

Practitioners of engineering, both Gnomish and Goblin, will recognize this type of map in circuit and network diagrams. The physical layout of the network is not as important to understanding how it works as the topology. Engineers need to know what connects to what when troubleshooting a design problem, not neccessarily where those things are located on a circuit board or network. Often elements of the network can be completely glossed over because the details are irrelevant to the discussion at hand — the concept of the Internet as “the cloud” comes from this reduction.

I’m used to looking at geographic maps for battlegrounds. The in-game maps show terrain, the location of objectives and obstacles, and your position with accurate scaling. These maps accurately reflect the battlefield and are useful tools.  Every twist of every path is accurately documented.

But there are times that these maps fail us. They present a lot of information you don’t need when thinking about strategy. They don’t convey the objectives of the battleground, or the flow from goal to goal. They aren’t good tools for new players to learn from, either — much like a geographic metro transit map, there’s a steep learning curve to know where you are and where you go next.

In talking with Nibuca on the Twisted Nether Blogcast, it occurred to me that the maps are part of the barrier to entering (and enjoying) the battlegrounds. “It’s not obvious what you’re supposed to be doing,” she said, and I agree completely. While dungeons are, for the most part, linear affairs, battlegrounds are not. The objectives are not clear when you first zone in, and — here’s the kicker — knowing where to go next is never obvious. Nearly every battleground has a symmetric map, which means there are no cues like “follow this corridor.” Battlegrounds are more complicated than that.

Using the London Tube map as an inspiration, I think looking at the battleground maps logically and topologically, instead of geographically, can help overcome this barrier to entry. And with rated battlegrounds coming in Cataclysm, more and more guilds are going to be looking at setting up strategies and teaching people to fight in these instances. Hopefully these maps will prove useful for both groups.

Normally, I present maps to illustrate a strategy.  Here, I’m just presenting maps to give you a different perspective on each battleground.  I expect you’ll see me use them again in later strategy posts.

I’ve tried to keep each map simple, sometimes absurdly so. This is deliberate. There are complexities to each battleground that are confusing to the new player, and as such have been avoided. There’s a vast amount of tactical knowledge that you pick up running a battleground that can completely influence the fight, but the purpose of a topological map is to point out the flow, not the terrain.

The legend for these maps is:

Let’s take a look at the simplest battleground map of all, the Eye of the Storm.

EYE OF THE STORM

The flag sits in the middle of the battleground, again with only two ways to access it. There is no graveyard associated with controlling this objective — instead, it’s something you have to capture and then return to a controlled base.

Each side starts with one graveyard that cannot be captured; these are the spawn points and cannot be captured by the other side. Players must jump down from the floating rocks to reach the main battleground, represented by the colored arrows.

There isn’t any way to circumvent the routes shown here: this battleground floats in the Twisting Nether and you would need to fly in order to traverse it. So control of routes is absolute. 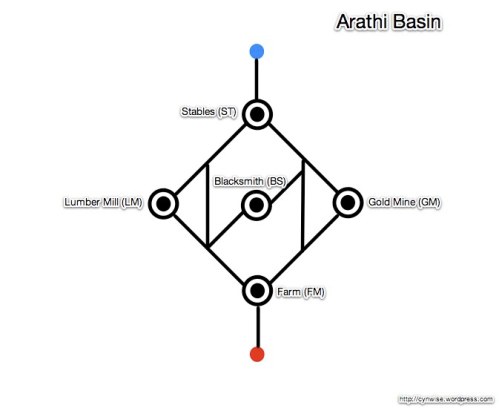 Arathi Basin has 5 nodes, each with an associated graveyard.  These are the places where you really should fight at the flag.  There are two spawn points that cannot be captured by the other side, but can be accessed and camped, at either end of the map.

The orientation of the geographic map sets the flow of the map along a NW/SE axis, which can be confusing. The bases are set out with one close to your starting point, one far away, and three in the middle.

Unlike Eye of the Storm’s map, it is possible to move outside of the lines in this map, though it almost always involves either going very slowly, falling off a cliff, or both. The Lumber Mill is on a cliff, so characters who can slow fall, levitate, or parachute can go directly to the Blacksmith. Same going from the Blacksmith to the Gold Mine. Going from the Farm or Stables to Blacksmith requires swimming or water walking.

All of those are ‘difficult’ paths between nodes, so I omitted them.  Chalk them up to “quirks of the terrain.”

STRAND OF THE ANCIENTS

Strand of the Ancients is interesting because it’s the only half-court battleground in the game. One team fights to the Titan Relic while the other defends, and then everyone switches sides. So the flow of the battle always goes from North to South, from the beach to the relic.

Strand has a lot of little touches that make it interesting. Teams start in different places (landing ships for offense, south GY for defense) than their fallback graveyards (beach and courtyard). Control of the graveyards gives control of resources, not the other way around.

Seeing Strand like this really highlights the importance of graveyard control in this fight for both offense and defense. More on that in a later post.

The Isle of Conquest has a deceptively simple flow. This is a battleground where terrain, elevation and lines-of-sight matter. The different abilities and vehicles each node grants your team make this a far different place than Arathi Basin, where all nodes have equal resource value. You can win IoC with control of a single node, for example, something you cannot do in Arathi Basin.

That said, IoC has a typical circular map.  The three nodes in the center force you to divide your forces to focus upon the objectives.  In this aspect it’s very much unlike the other 40-man battleground, Alterac Valley, which is a linear map that doesn’t require tremendous coordination to run.  Let’s look at AV next.

Alterac Valley is a monster of a map no matter how you look at it: there are 24 points of interest spread out in a long North/South battleground. Because the graveyards are separate objectives, graveyard control is its own game within AV.  Knowing where to station defenders is paramount as your forces are sent all over the map.

However, despite the complexity of content, the flow of Alterac Valley is relatively straightforward.  This is not a circular map like EotS, AB, or IoC — it’s linear.  Alliance rides South while Horde rides North.  Teams can establish chokepoints and restrict the enemy from moving any further up the map.  It’s a fascinating, unique battleground, and the map is no exception.

Okay, so I love Alterac Valley.  Like THAT’S a surprise.

Remember how I said Eye of the Storm had the simplest battleground map?

Well, despite what you see above, I still think it does.  Warsong Gulch has the simplest topology, but not the simplest terrain.  There are 4 different approaches into each base, each with strengths and weaknesses.  Learning the ins and outs of the bases is essential.  Learning the terrain of midfield is also essential. But when I look at the terrain of Eye of the Storm and compare it to Warsong Gulch, it’s a far simpler place.  There are two approaches to each base.  There are few obstacles between each.

But in terms of the goals and logical flow of Warsong Gulch, it is as simple as this map makes it.  There’s your flag, and their flag.  Everything else – ramp, tunnel, roof, balcony, midfield – is immaterial.

If there was a zen battleground, Warsong Gulch would be it.

Though it’s not a fully-instanced battleground, I’ve also made a Wintergrasp map in the same style. Wintergrasp is still relevant to many players, and the points in my Introduction to Wintergrasp still apply.

I altered the keep layout a bit to illustrate the flow of the outer ring defenses — breaking into one of the outer keep courtyard doesn’t reduce any of the others, and you have to go through at least one before getting to the inner keep.

I said at the top of this post that I didn’t have a specific strategy to illustrate by presenting these maps.  That’s mostly true.  I think that looking at the logical flow of a battleground is vital to understanding the strategy behind it.  But it’s also vital to learning it and making sense of those first crazy runs across the map.

I hope you find these maps useful.

32 responses to “A Different Kind of Battleground Map”