You may recall the topographical battleground maps I did a few months ago; maps that showed the logical flow of the battlegrounds instead of the actual terrain.  The feedback I got on the designs was great and much appreciated, but I kept thinking that I needed to do more with them.  Maybe a series of introductory posts to each BG, or a detailed analysis of various strategies used in each fight.

But every time I sat down to write such a thing, I ended up staring at the damn maps, thinking that while that use was all well and good, it wasn’t quite right.

Apparently, I needed to put them on some clothing instead. 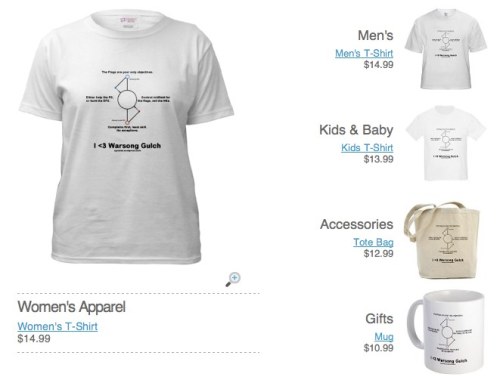 Introducing Cynwise’s Battlefield Shop,  where you can get your favorite map and simple strategies… on stuff.  There are a few designs available:

I won’t be going to Blizzcon personally, but if you catch anyone wearing these shirts there, send me a picture and I’ll post it!