The Isle of Conquest is REALLY Broken

First off, did you know you could repair cannons in the Isle of Conquest now? I think this is new. I don’t know if this is something only Engineers can do, but it’s kinda cool to be able to revive cannons.

Repairing cannons is about the only good thing I can say about the Isle of Conquest right now. It’s broken in so many ways that puts every other time I’ve said it’s broken to shame. This isn’t about having the terrain favor one side or another.  Oh, I long for those days now!

No, instead we have:

Think I’m kidding about the Big Pink Blocks of Doom?  Vikt (from Of the Horde) sent me this great screenshot:

… which kinda demonstrates the futility of Alliance breaking down the gate.

Let’s look at what these bugs do to each side’s strategy.  For Alliance:

As an Alliance player, you’re going to get IoC in your random queue more often than you like precisely because the Horde are queuing for it. And that means you’re going to lose. (Sorry about that, I’m just keeping it real, yo.) The best way to try to win is to send a small force to the Docks, with a larger force to contest the Workshops. I have yet to see this work, but it seems like the only viable strategy is to disrupt the Horde assault.

The important thing to keep, if Isle of Conquest comes up as your random BG, is your sense of humor. This battleground has BIG PINK BLOCKS that completely negate whatever skill advantages your side might have (or lack). This BG is broken.

Don’t sweat it. Laugh, and move on.

P.S. The scoreboards are broken, too: 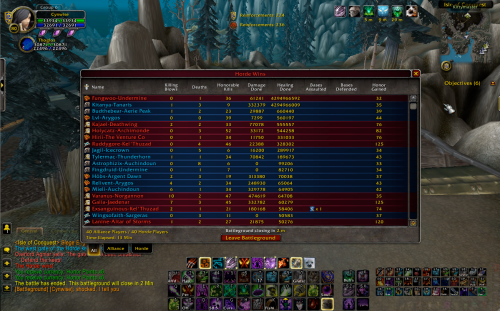 Although, I suppose it’s possible that those two REALLY know how to heal…

14 responses to “The Isle of Conquest is REALLY Broken”