They Love Me Behind That Wall 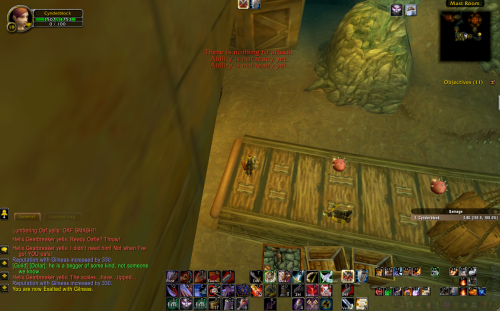 Cynderbock is Exalted with Gilneas before Cataclysm.

That’s crazy to think about, considering it took, at most about … 10 runs of Deadmines, max, to achieve? The new Gilneas Tabard (one of the new City Tabards, available at vendors near the home city Flight Points) allows you to gain reputation gains in dungeons, and if you do them at-level, they reward pretty substantial rep.

So making a level 19 Ambassador just got a whole lot easier.  Lock your XP, get tabards, run LFD for profit and a title. Easy. You could do LFD at level 15, even, if you like RFC – or if you have friends who will run you, you can enter the dungeons at level 8-10.

This is a great change for the game, making it easier to use LFD as a leveling tool without missing out on all the benefits of questing.

Does it trivialize the Ambassador title on Cynderblock? Not really. Yes, it’s vastly easier to get now, and I expect I’ll see even more of them than I did before. That’s fine. No, really, it is!

See, the changes now can’t take away the fun I had in getting that title. Or, for that matter, getting Exalted with a faction that isn’t even really in the game yet. I mean, it’s not like I get anything from the deal, since ‘block still can’t use a mount. (Not that Gilneas has a mount to get, anyways.)

No, it’s time to move on and look forward to all the new things Cataclysm will bring us.  And no matter what else – they love me behind that wall.

4 responses to “They Love Me Behind That Wall”