On Learning to Accept the Role of your Class 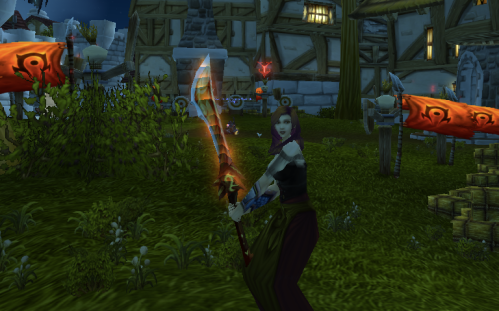 I want my warriors to be better at PvP than they actually are.

It’s strange for me to say that, because there’s really not much more I could do on Cynderblock to improve her. She has BiS gear for every situation I’ve been able to plan for. All three specs, different situations, PvP and PvE. Low level questing, high level questing. Trash tanking, boss tanking, instance soloing. Stamina stacking, Armor stacking, Avoidance stacking, Crit stacking, Intellect Stacking – all of it.

But no matter how good I make her, she’s still going to suffer from some huge drawbacks in PvP:

The counterbalance to this is that she’s incredible in PvE. In a traditional 5-man setup, she’s an awesome tank. She’s fun to quest on. She can kick ass with authority in a dungeon.

But in PvP, she’s … listen, I play a lot of classes in PvP. Warriors are weak against Hunters and Mages in the 19 bracket. They’re one of the two weakest DPS classes. They can be strong FCs, but they really need a pocket healer to be fun.

Tonight, I queued up for WSG, got in, and saw that there were a few familiar names. Everyone was over 1000 HP, something I haven’t seen in a while, and I attribute that to the removal of the F2P twinks from the bracket.

But I wasn’t the FC – a shaman was, and she did it very well. I don’t sit there and pout when this happens; I switch over to Offense, slap on my DPS gear, and give it my best go. I get in position to repick, or I make myself a nuisance with the EFC – I try to contribute as best I can.

It’s usually not a lot of fun. Hunters zoom in on me as a free HK if I’m crossing the field. I’m not very effective.

Warriors are the best tanks at level 19, surpassing Paladins for threat (especially AoE) and Bears. They’re fun and dynamic little pocket rockets, stance-dancing their way through an instance. I know that with the threat changes it’s not really saying much that Warriors have great threat from 15-24, but… it’s what they have.

Tanking Deadmines? Great. Having versatility in PvP? No. Not yet. They can be extremely versatile at level 85, but … not at 19.

Level 70 is better, but not balanced yet. You have a lot of the gap closers, but hunters and mages are still nightmares. DKs are crazy good. I prefer playing Prot PvP because of the mobility it gives me, letting me ping-pong around the battleground, stunning, shocking, pummeling, charging from one caster to another. I see how the toolbox has improved, and how it just needs a few more tweaks.

It took me a few weeks of playing both warriors as my primary characters for me to realize a few things.

TIMES I WAS NOT ALL THAT HAPPY PLAYING PROT PVP

Interesting breakdown, isn’t it? I was tempted to say, hey, this is problems with these specific brackets. But I didn’t struggle in the same BGs on my Priest, and my Druid handles them all pretty much the same – Bubble/HoT all the things!

I remember this happening on Cynwise (warlock) and Cynwulf (death knight), when they were pretty much the only toons I played. I struggled on WSG with ‘wise – a lot, OMG, did I use to hate that BG – but once I switched over to ‘wulf, WSG was cake. It was easy. AV was fun on both toons, but I did very different things there. Areas where I struggle on one toon are trivial for another.

Warlocks are a good example right now. If I were to base my opinion on warlocks based on how they do in leveling BGs, I’d be really down on them. Man, they suck in almost every bracket.

Except 85, where they become kings and queens of the 3s. Where they do just fine in PvE. Where they do fine in most BGs, though they’re not part of a standard rBG comp. 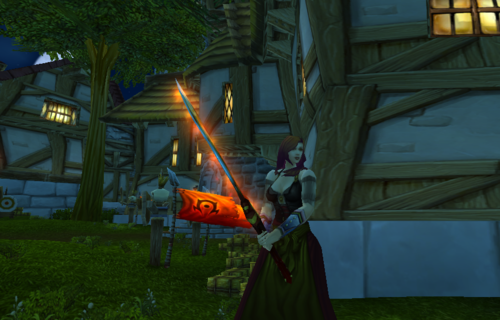 I mean, we talk a lot about class parity and homogenization in PvE, but – in PvP at least – I’m not seeing it. Sutble differences in abilities affect playstyle, which then interacts with our individual preferences.

I like playing AV on Ashwalker. I enjoy tanking on her. But I’m discovering that I enjoy PvP a lot more when there’s a healer involved, because she kills waaay too slowly. I enjoy PvP more on my Druid, where I feel like I’m making a massive difference by healing everything in sight, than I am on my warrior – except when my Warrior is tanking or FCing. So I’ve stopped queueing for randoms on Ash, while I continue to random it up on Cynli.

I have been thinking on and off about Vidayla’s struggles with Firelands healing and the Hybrid’s dilemma – what happens when you want to play a character, but the spec you want to play is not a good fit? There’s tension that arises there, between the suitability of the class for the role, your comfort in playing different things.

There’s also tension when you have a main (like Vid does, like I … used to) and that main is you, it’s your avatar, and you realize that because of the way in which you’ve strucutred your relationship with your avatar – the limits placed on the toon transfer to you. I’ve looked at a lot of PvP achievements and realized that they’re just easier for some classes to do than others, so if you happen to play one of the harder classes, guess what? You’re screwed. Not your character, but you get screwed over by the game and made unhappy.

Vid had a good example of this – The FL fights she’s on needs more DPS, fewer heals. So she either had to stick with the character she liked (for healing) and DPS in a spec she didn’t like, drop healing and go full time DPS, or sit out the fights.

I can play Ash in AV and WSG as PvP, or I can tank all the things. Those are the places which make me happy to play her. I can play other BGs on her, but it’s not as much fun, and is sometimes downright painful. Blcok is even more limited in her scope right now, which makes me sad.

This may be a good side effect of the project-based toon creation I’ve been doing of late. I get them to where I want them, and then see where the fun actually resides. It’s been a challenge learning to be honest with myself about where I do and don’t have fun on a given toon, of accepting that not every character can be everything at all times. We’re all just searching for balance, here.

I think it’s important to be honest about how your playstyle interacts with the class, and how that in turn will make certain activities in the game more or less enjoyable for you. If it’s raiding or PvP, questing or running 5 mans – accepting the role you fit best into is vital for long-term happiness.