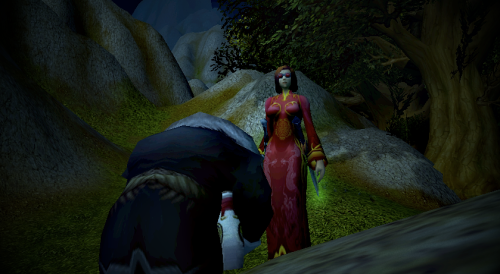 In the course of Blizzcon 2011, Blizzard announced several changes to the PvP system, as well as planned additions to the Battleground and Arena system. It is worth noting that none of this is set in stone; Blizzcon announcements are more akin to ideas presented at a product planning meeting than actual release notes. I’ll try to keep the speculation to a minimum.

Three new battlegrounds and one new Arena map were announced as potential additions to the PvP system.

The following are the proposed BGs:

And a new Arena map:

Some of the terms describing the battlegrounds might be unfamiliar to you – I know they were to me, because I’ve never played Warcraft III.

I wouldn’t count on all of these making it in to the final release of Mists, or of making them in with their current forms, but it’s nice to see some really interesting new ideas out there. While I like that Twin Peaks and Battle For Gilneas are variations on two very good existing battlegrounds, it would be nice to see something new.

Of course, vehicle combat was new, but it didn’t make for more compelling games. I’m interested to see how the DOTA game, in particular, shapes up – will players control avatars that give roughly equal abilities, removing class and gear inequalities? Some people would love that (skill > balance!), others would hate it (I didn’t level a Demolisher 85 levels.)

We’ll have to wait and see.

As far as the new Arena map? It’s about time. Getting the Ring of Valor back during this expansion wasn’t exactly an improvement. There was a great lack of anything Cataclysm-themed in Arena. Getting a Cata map an expansion later isn’t great, but it’s a sign that Blizzard is showing some attention to Arenas again and could indicate a Pandaren-styled map later in the expansion.

You did not mention a world PvP zone for MoP, maybe that could be the World PvP area for MoP?
The war between the Horde and Alliance will really heat up in Pandaria every patch, so we are looking forward to integrating that.

Cataclysm had a certain amount of “the war heats up” feel to it in the Blizzcon previews too, but World PvP took a hit on most realms. The biggest success for World PvP wasn’t the zone designed for it – Tol Barad – but rather Firelands on a PvP server. That’s where the real PvP has been happening, not in the island of musical chairs.

So it’s interesting when Blizzard doesn’t announce a featured world PvP zone after two expansions with a PvP zone as the PvP centerpiece of the expansion.

I think it’s incorrect to say that the idea of a world PvP zone is a failure just because Mists doesn’t have one at this time.

What I do think this implies is that world PvP zones are expensive to create, and that Tol Barad consumed far more development resources than it saw playtime.

I have in the back of my head that there’s a KPI Blizzard uses to evaluate the success of a development effort – player time over development cost. The idea is that something that is cheap/easy to implement and draws medium interest is better than something that costs 50% of your development resources but draws in the same interest. The ratio of player participation to development effort would seem to be a key success metric in any subscription model-based business that wanted to optimize development priorities.

And that’s what I think happened here. Wintergrasp was ambitious and brought in the players, but incurred major costs down the road when it couldn’t scale. Tol Barad cost too much to build relative to the number of players playing it, so Blizzard is going to try something else.

All that development effort for naught.

I don’t blame Blizzard for axing the idea of a World PvP zone. Tol Barad cut short development on both Twin Peaks and Battle for Gilneas – dramatically on BfG, as they had to scrap their original plans for a battle within the city and reskin Arathi Basin to get something shipped in time for Cata’s launch. Having development resources focused on Battlegrounds and Arenas is actually a good thing.

If you’re working on Battlemaster, you might have cried a little bit upon hearing this. I’m sure I’m not the only one who has tough achievements on alts, but not on my main.

There are a lot of questions to be answered about how this is going to work; if your total number of victories will count for Veteran achievements, if your meta-achievements will include the prerequisites on multiple characters.

But it’s a step in the right direction.

RESILIENCE AS A BASE STATISTIC

Big, major changes ahead for PvP gearing. Resilience will become a base statistic.

I think it’s honestly easier to tell you what we don’t know about this change than what we do know right now.

Making Resilience a base statistic is a neat twist to the Valor and Vengeance system used by Rift – it allows the PvE and PvP systems to have effectively different damage systems regardless of the gear worn by players. That’s pretty neat! If damage gets out of control in PvP, they can either add more Resilience, or change how it scales so everyone takes a bit less.

The problem is that we don’t know how PvP gear will look in Mists. Will players still progress from about 25-30% damage reduction to 45-50% over the course of the expansion? What will the baseline reduction be with no PvP gear? Will there even be any more PvP gear?

I hesitate to even say that this is a good solution to the problems of low level PvP, because I don’t know how the scaling is going to work. Right now, Resilience has a flat application (10.74 points per % reduction) until level 35, when it starts to increase on a curve to hit a degree of normalcy at level 70. If this scale remains the same, then low level characters will start off with weak damage reduction that increases as they level. Unfortunately, burst damage is highest in the lower levels, and damage reduction is more necessary at 10-25 than it is at 50-80. So maybe they’ll start off with a good chunk of Resilience to help with lowbie PvP, or the scale will be changed…

… we just don’t know enough to say how it’s going to help certain areas of the game. It has the potential to be a good improvement to PvP at all levels, but we have to wait and see.

That said, I am cautiously optimistic that this is going to be a very good change, both for leveling PvP and endgame PvP.

… wait, was that a 3 second CC/interrupt I just saw?

… off the DR of many, many other CCs in the game?

(Keep an eye on this racial and consider it a viable option for many classes.)

I saw earlier today in one of the panels (and I’ve lost the reference now, sorry) that Monk healers will have non-targeted heals and need to be in melee combat to heal. That’s potentially very useful in PvP, particularly Arena combat. We may see a lot of Monk comps in Season 12 based solely upon this mechanic.

I expect Monks will be very potent in the early stages of Mists PvP, and that you would not be amiss in trying one out. If the Death Knights were any indication, it will take an expansion to really get them balanced out.

If Pandas aren’t your thing, all races can be Monks except for Goblins and Worgen.

The situation for PvP is going to change a lot between now and the release of Mists of Pandaria. While many of the changes announced this weekend are exciting, there’s a lack of a single, defining PvP centerpiece for this expansion. Instead of Arenas (Burning Crusade), Wintergrasp (Wrath of the Lich King), or Rated Battlegrounds (Cataclysm), the focus is on an “increased conflict between the Alliance and the Horde.” We don’t know yet if that means World PvP is going to make a comeback.

We shall have to see what this diffused focus means for Warcraft PvP.

21 responses to “Blizzcon 2011: PvP Changes in Mists of Pandaria”