The Curious Case of the Big Daddy and Secretly Scaling Equipment 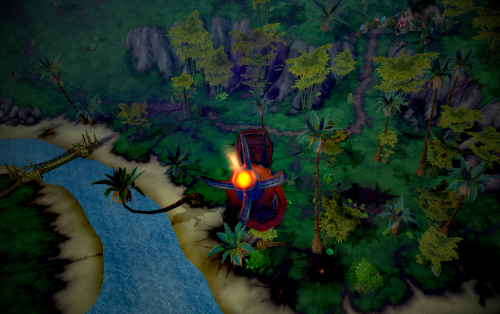 The Big Daddy is the Cataclysm heavy explosive available to Goblin Engineers. It requires Engineering 440 to use, and 500 to make, it’s expensive, but it also does respectable damage – about 5k – and the damage is tripled against targets at full health. Oh yes, it can crit, too, so you could get a lucky 30k damage off this baby. It’s also off the GCD, so it’s great to use after an instant cast spell, though you really want to use it on “unsuspecting targets” – thats those poor folks at full health – whenever possible.

They’re not quite as nice as the Global Thermal Sapper Charge was in the early days of Wrath – massive siege damage in SotA/WG/IoC was awesome – and they’re not as cheap as Saronite Bombs, which you could make part of your attack rotation with impunity – but they’re good for what they are.

Except… you notice that little bit about “Requires Engineering 440” to use?

You can get Engineering 450 at level 65, when most characters have around 4k-8k health. Even in the level 70 twink bracket, health pools range from 10-14k, with 18-20k reserved for tanks.

These bombs can 1-shot an entire defending force if you attack when they’re at full health at level 70. At level 80, they can still take out 1/3-1/2 of the defender’s health.

PvP being PvP, players figured this out, and maxing your Engineering at level 65 became an even easier way to dominating the battlegrounds than rerolling Mage.

So far, you’d think that this is a simple story of an item being overpowered in the leveling brackets and getting removed from said brackets, right? I mean, you can’t have bombs that can take out entire nodes of defenders, can you?

But instead of doing the obvious thing – raising the required Engineering level beyond 450 – Blizzard did something really interesting.

Sometime between 4.1 and 4.2, the Big Daddy was changed so that the damage scaled with level. No longer was it 5k at level 65 – now it was 700. Level 79? 1400 or so. The damage was changed to allow it to still be used at lower levels, but for it to become less attractive overall. Saronite Bombs do more damage at level 65 than Big Daddies, which solves the problem neatly and returns us to the idea that you might be able to use things from the next expansion while leveling, but you probably shouldn’t be using things from two expansions away.

That’s actually an interesting rule to consider: think about how unbalancing Wrath-level gear, gems and enchants would be if they were available at, say, level 30. There are limits on enchants to prevent this from happening, for instance (item level 35 for BC, 60 for Wrath), but no limits on the gems – but sockets don’t show up until BC-era gear anyways, so it isn’t a big deal. With the introduction of Cataclysm, gems needed to have restrictions added because you could have level 60-70 players sporting Cataclysm gems.

So why didn’t the devs just change the Engineering requirements on the Big Daddy to be 475 instead of 440? This would have placed the items out of reach of everyone lower than 75, which would take care of the most egregious abuses. It would still unbalance the 75-79 bracket, but that bracket is already unbalanced because of the availability of Cataclysm-balanced gear starting at 78. The 80-84 bracket is unbalanced as well, but it’s unbalanced because of scaling and the hard ramp of gear. Adding in a bomb that does 5k-30k damage isn’t going to further unbalance things.

Think about this for a minute. Instead of making a simple change that mostly fixed a problem, the developers dramatically changed how something worked by level, making it scale all the way from 65 to 85 (and possibly beyond). It still does a lot of damage, and is great against unsuspecting targets, but it’s not going to 1-shot people in any bracket it’s available in. That took thought, planning, and careful analysis to realize that a simple level restriction wasn’t going to work.

In every sense of battleground fairness, this is a great change. And it’s great for many brackets.

Which is why it’s so unexpected. Not because we shouldn’t expect that Blizzard does the right thing (we should), but that it’s one of the first times I’ve seen an item nerfed in PvP in such a way to take into account its impact in multiple brackets.

The problem with items with fixed stats is that their value increases the earlier you get them. Cataclysm introduced stat inflation into not just the endgame, but up through level 65. The inflation is really unbalancing. It doesn’t take a scientist to notice that if you increase health pools five times between level 80 and 85 that maybe, just maybe, items that are scaled for 85 shouldn’t be used at lower levels.

But hopefully, we can start seeing more fixes like the Big Daddy nerf, which address this inflation in multiple brackets.

Fixing leveling PvP is not simple. Little things add up. I’ll wager you didn’t even realize there was an explosive that could 1-shot you from level 65 to 80 until this post. The fact that it was fixed without your knowledge is a good thing. There are a lot of small, unbalanced items which good PvP players seek out and use against their opponents, and they add up. Not all of them are as big as this one, but hey – this is the Big Daddy we’re talking about.

Smart fixes like this raise the possibility of other items using smart scaling, which would be a good start towards equalizing the brackets. Heirlooms already do this; having normal items start adhering to this rule would help bring leveling PvP back into a more balanced state.