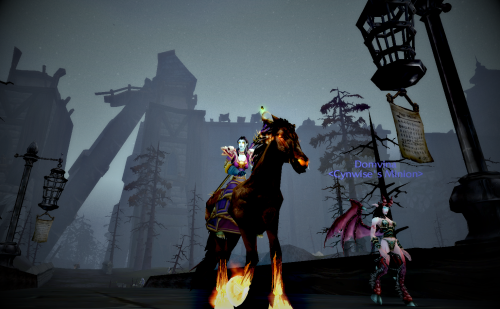 Well, I don’t think I expected Cataclysm to turn out this way.

It’s not really a secret that I have a Forsaken Warlock. I wrote about her in my CFN essay, On The Forsaken, and it was pretty clear that while I didn’t dislike playing a warlock per se, I wasn’t really very enthusiastic about the alt. I didn’t sit there and go, I’m so enraptured by the gameplay that I am not paying attention to the story. In another post, On Revelations, I had talked about how I hadn’t leveled a Warlock past level 10, and how I hadn’t picked up my main since the end of Season 9.

So here I am, questing through Silverpine on a Forsaken Warlock when it hit me.

… this is actually a lot of fun.

I don’t know if it’s the zone (it might be), or if I’m doing everything deliberately as wrong as possible on my little baby warlock, experimenting to find out what really works while leveling, or if it’s just because I’ve let go of big Cynwise, I’ve grieved for her and gone through my dark night of the soul. I hoped I would come back to Silverpine and see it someday; I just didn’t know when.

But I honestly didn’t expect to have fun again on a warlock until Mists. I thought I would do the Silverpine/Hillsbarad quests and then delete this toon.

Nope. She’s not my primary character right now, but she’s in my top 3. 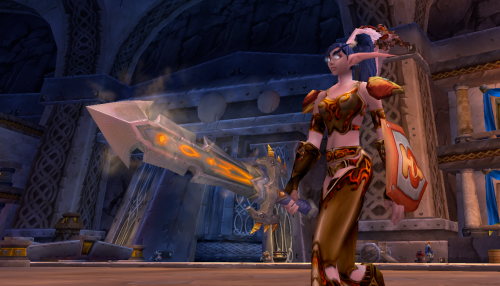 It’s hard to reinvent ourselves.

It’s hard to look at ourselves and say, this isn’t working, this isn’t the way I want things to be going, and then to do something about it. It’s hard to selectively let go of the past, to say, I know I said I would only do these things and never do these other things, but … maybe I was wrong.

Or, more likely, maybe I became wrong, over time. It might have been the right thing then, but now it’s time to change, and to let go of the past and embrace new things.

Never say never again, and all that.

You may have noticed that this website looks a little different today. It has a different title. It has a different look. If you’ve been following me on Posterous, you know that I’ve not been writing as much about warlocks and PvP, but I have been writing a lot about Warcraft. And I haven’t been entirely happy with the platform, but I’m happy with the writing, and the rules around the writing.

I think it’s safe to say, actually, that my best writing in the past 6 months has been over on my Field Notes blog – an experiment I started on a lark – than over here. And that that has led to a bit of fracturing, a feeling like I’m picking up blogs like detritus and that I’m losing my focus. That I can’t keep this one going and this one and this one and oh god Go Mog Yourself is picking up massive steam.

So I’m going to change things a bit. Jettison the old, consolidate, focus. Digital stuff is still stuff, and it still weighs on one’s mind.

(Nobody reads Cynix’s blog, and I dont blame them, so I’m not worrying about it for now.)

This is kinda weird for me to talk about – I don’t do a lot of administrative posts – but sometimes we have to talk about reinventing ourselves, about how we are changing, so that people can follow along and know that while we might be ending some things, we’re continuing with new ones in their place.

So here’s to jettisoning the nevers, and getting on with reinventing ourself.