Leveling Data on Warlocks is Worse than I Thought

This is the second post in The Decline and Fall of Warlocks in Cataclysm series. 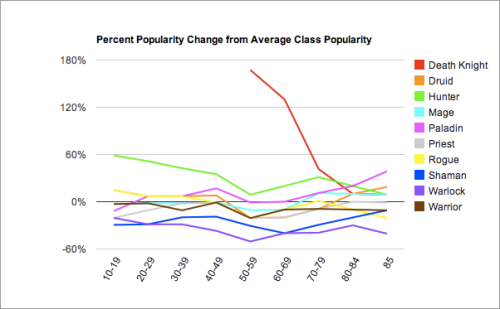 This is an addendum to Where Did All The Warlocks Go in Cataclysm?. It’s not the followup I promised, that is still in progress.

Unlike most classes, Warlocks decline as they level. There’s a slight decline from 80-84 to 85, which might represent people leveling to endgame and then dropping the character, but it’s not huge. They decline a bit (3%) through the leveling process, but that’s nothing like what happens to Rogues (5%). I think you have a stronger case for saying people have started a lot of Rogues but not gotten them to endgame than you do with Warlocks – 3% could be just noise in the system from the DK bump, plus, there’s the Rogue Legendary Carrot – but there is still something going on there.

I was wrong and underestimated how bad things looked for warlocks through the leveling process. They decline 20% in popularity from levels 20 to 85, and are substantially underrepresented at all levels. Few players are rolling them, fewer take them to endgame, and even fewer still play them at endgame.

Your chart showing the trend of toon popularity would look better if you indexed them to the average (for pre-DK the avg is 11.11, and 10 after). This really drives home the trends.

I took Jason’s suggestion and indexed the leveling data, a stats term for assigning the average value to 100 and then comparing each value to it in succession.

So we start with our original leveling data from the WarcraftRealms Census:

We then turn it into an index so we can more clearly see how each value deviates from the average value for that bracket. What’s better, we can now track the changes accurately over the leveling process – no longer do we have to wave our hands and ignore the effect of DKs changing the average value midway through the process.

The average value of this index is 100, so values over 100 represent classes which are more represented at that level.

Here is the same data, this time presented as percent deviation from the average:

The Class Distribution Spreadsheet has been updated with a new tab for this information.

This data shows how under or over represented a class really is, compared to what the average should be. At level 10-19, Mages and Warriors are about where the average is, while Hunters are a whopping 59% more!

Using the index helps explain and quantify one of the things I was trying to articulate with the Mage numbers: even though they start at 11% of the population at level 10-19, and end at 11% at 85, they experienced growth as measured by the average.

The index also allows us to measure the relative deviation from the norm for each class as they level. We can clearly see things like:

But what the data shows regarding Warlocks is disturbing.

Warlocks drop in popularity by 20% between level 19 and level 85. There is no level that they are a popular class. None.

People don’t want to try them, and when they do, they don’t stick with the class to endgame. They barely make it to level 40, for crying out loud!

I thought that the 6.7% figure of total endgame population was pretty bad. I think the -37% at 40-49 and -41% at 85 is worse, because it shows that the class is in trouble through the majority of the game.

Keep this in mind as you hear about Warlock developments in Mists.

(Thank you, Jason, for suggesting this way of looking at the data.)