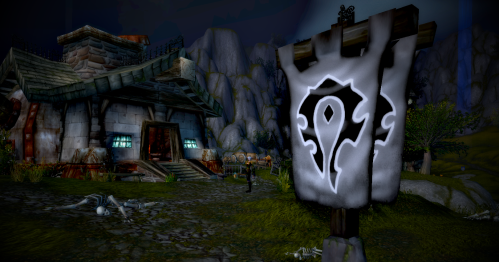 This is the second post in my series on resurrection vectors and graveyard controls in Warcraft’s battlegrounds. I should just go ahead and admit that this is going to be a series; it is. I don’t have a catchy name for it yet, but why wait for a title? Let’s just dive right on in and talk about Arathi Basin.

The resurrection vectors of Arathi Basin are to the nearest controlled graveyard, including the original spawn point. These vectors have tactical implications for skirmishes at individual nodes and strategic importance when dealing with troop movement. In this post I’ll focus on the tactics at each node; we’ll talk about the Iron Triangle in the next one.

Control of the node’s flag gives your team control of the node’s graveyard. Each node starts off uncontrolled, but clicking on the flag assaults the base, turning the flag grey. The graveyards come into play one minute after the initial assault, when the node is captured and the flag turns blue or red. From this point on, they work like a standard graveyard with rez waves at the spirit healer.

Each node’s flags are on the other side of some object or building preventing the resurrection wave from knowing exactly what is happening at the flag while dead, and requiring them to run around the obstacle to get to the flag. There are thus two components to the local rez vector that have to be considered:

Because defenders have to run a route to get back in sight of the flag, attackers have  additional time to allow attackers to assault the base. These lines of sight are important! 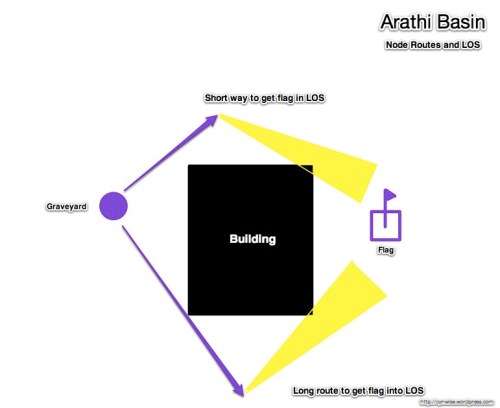 The above diagram is a general representation of each node. You might have to flip the orientation a bit, or change the building shape and add in chickens or undead horses or something, but it’ll suffice for a discussion on graveyard control. The routes aren’t equal length to run, but it’s more important to get to where you can disrupt the attackers than necessarily get back to the flag.

From a tactical standpoint, the ideal placement for defense is near the flag to prevent capture, no matter where the attack comes from. Fight at the flag! is the rallying cry of introductory battleground manuals everywhere, but the real tactic is:

Creating this zone of control is important and takes practice. You don’t want to stack on top of the flag, but you don’t want to be too far away from it. Teams should get used to moving forward and engaging the enemy away from the flag without getting pulled off it.2

Furthermore, the direction reinforcements come will either help or hinder your flag defense. Having rez waves passing by the flag to get back into combat is far safer than having them never see the flag.

Let’s take a look at a flag-side assault. 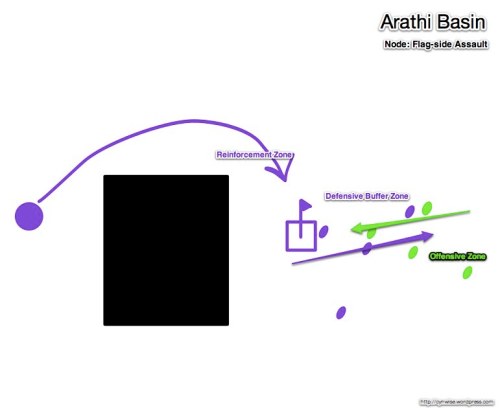 Attacks on the flag side of the node generally put the defenders in a good position. They are able to watch the flag and have a few people cluster near it while sending DPS off to meet the assault at a moderate distance. Lines of sight are usually pretty clear on both sides, and rez waves know which direction they need to be heading to get to either the flag or to battle quickly.

A more interesting tactic is to assault the graveyard side directly, with the intent to both pull defenders away from the flag and neutralize rez waves quickly. 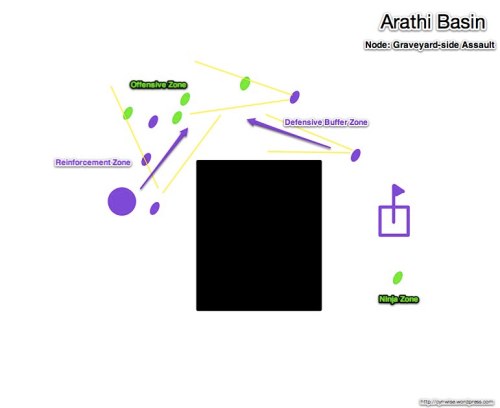 Attackers can (and should) use the resurrection vector at the node to their advantage by drawing defenders into this kind of fight. Pushing towards the graveyard:

Establishing this kind of control allows attackers to really use the rez vector of the node against the defense. Remember, the whole point of using rez vectors is to send your opponents where they don’t want to be, where they will be ineffective. Hitting the GY side allows you do shift all defenders away from the flag.

Shifting defenders away from the flag means you’ve opened up the Ninja Zone. The reason that people like me yell FIGHT AT THE FLAG! so much is because if you’re not near the flag, not looking at the flag, not remembering that the flag is the really really most super important part of the entire node, then it’s open for the enemy to take. Ninja: doesn’t need to be a rogue!

One thing I like about Arathi Basin is how the resurrection vectors don’t dictate the entire battleground’s strategy. There are a lot of different ways to take a base. There are a lot of responses to which route you should take in which situation, depending on your class, role, and the position of your opponents. It’s not wrong to assault flag-side! There are plenty of ways that it can work – one of my favorite strategies is “ride in and kill everyone in sight, take the node before they rez.” Another one is “hit defenders with CC chains while standing/healing at the flag, click it often, steal the node while the defenders are still alive.”

But I also like that I have to ask questions like: where are the reinforcements going to come from? How long do I have before the next rez wave arrives? Am I getting pulled off the flag? Is it worth it to get pulled off a little bit?

I think it’s interesting how the answers change from battle to battle, from skirmish to skirmish.

Next time, I’ll zoom out a bit and look at the strategic uses of rez vectors and graveyard control in Arathi Basin.

(1) Even the Gold Mine allows two ways to return to combat – the path down the mine, and the path to the mine roof. GM suffers a bit in that the second route doesn’t put you on a radically different attack vector; ideally, you could turn right after leaving the graveyard and approach the flag from the Stables side.    ↑

(2) In an earlier post, PvP Playbook: Pulling Defenders Off Flags, I talked about how you can pull defenders off a flag just by letting them engage you at maximum distance – basically goading defenders to fight in the road. Don’t be that defender.↑