On The Vale of Eternal Blossoms 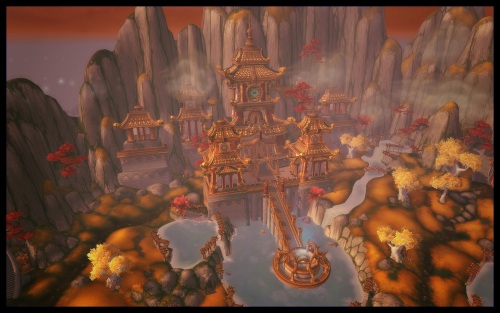 World of Warcraft’s Patch 5.4 was released on September 10th, 2013. This is the latest entry in my series on population data snapshots. All data is contained in the Google Docs Spreadsheet for 5.4. The methodology is unchanged from the previous entries:

As before, the patch dates are handy labels for each snapshot, but they mark the beginning of a period, not the end.

My hands are still in a lot of pain and I haven’t played in any real capacity since before 5.3, so my commentary is mostly about interesting facts in the numbers I find. I’ll leave it to current players to propose solutions.

CHARTS AND GRAPHS AND DATA, OH MY

First tab is relative class popularity over time at the endgame of a given patch or expansion. Some changes to note: 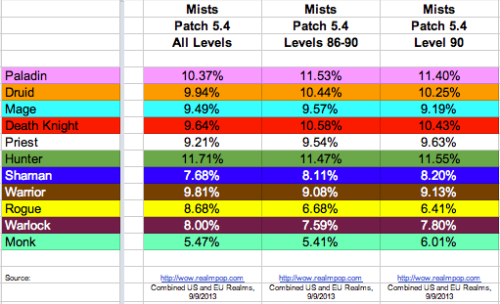 Rogues are probably the most interesting story here, since they continue to have more toons at all levels than at 90. Last patch Ghostcrawler confirmed that people roll Rogues, they just don’t finish leveling them, and we continue to see that here. This probably won’t change until changes are made to how the class levels, which is typically an expansion revamp.

Monks, Death Knights, Paladins, Druids, Shamans: they all get leveled to 90. That seems to be a hybrid class trait. Pure DPS struggle more. Warriors struggle as well, but we’ll talk more about them later.

The data set shrunk slightly between June and September of this year – 31.1 million toons as opposed to 31.3 million toons. I think this is the effect of characters aging off of the Armory after several months of inactivity, but it could also be a relic of the RealmPop database getting cleaned out periodically.

Next tab is patch-by-patch breakdown of class populations in Mists. You can see the drop in the populations between 5.3 and 5.4, which might be part of the overall drop in subs – or it might not.

I want to zoom in on my new favorite chart, the Percent of Total Class at 90: 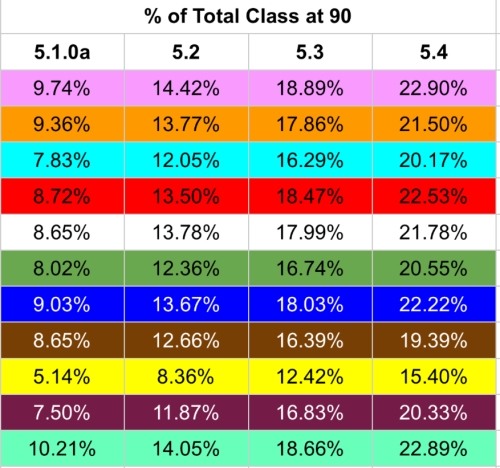 There we go. Nice and big. Notice anything there?

And then there are Warriors and Rogues.

The reason I like this data so much is because it functions like a health check – what are people bringing all the way to endgame? In the first patch, it was primarily mains, but now we’ve had a chance for people to level up their stables of alts. Hybrids are still a little easier to get to endgame than pures, though that gap is decreasing. The low percentages for Warriors (19.4%) and Rogues (15.4%) puts them at the absolute bottom of the pack. Warriors, as hybrid tank/melee DPS, should by rights be up at around 22%. Rogues should be around 20%, though even 19% would look okay at this point.

There are problems with those two classes. Everyone else looks pretty good. 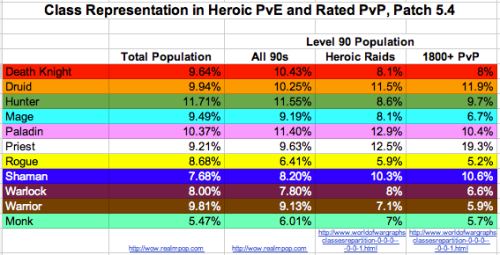 The next few tabs are, as before, the data sets from World of Wargraphs, which uses a different data collection methodology than RealmPop. The general population numbers match, however, so while there might be some statistical variation it’s slight.

This class looks at the relative popularity of classes within Heroic raiding (2+ bosses) and rated PvP (1800+ rating).

Priests, Pallys, Shamans, Druids, yep. I have no idea what’s gone on with raiding this tier so I’ll let other bloggers cut loose on this data set. Here’s the breakdown by specialization.

Ready for the PvP? Of course you are.

In case you were wondering, Priests are really, really overrepresented in PvP right now.

The Discipline Priest numbers are … way out of control. I don’t know what’s actually gone down this season, but they are probably going to get some heavy PvP nerfs. The last time we saw deltas like this was with Arms Warriors at the beginning of Mists, and they were nerfed into the ground.

THERE IS TOO MUCH, LET ME SUM UP