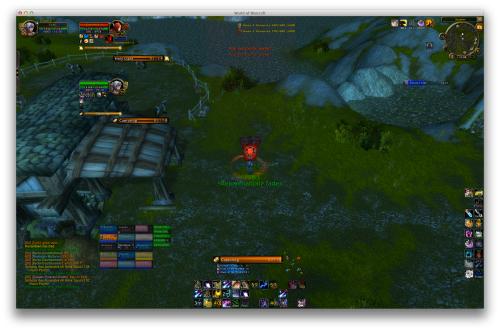 I'm at your flag, stealing your base, because you got pulled away chasing my friends.

In PvE, being called a ninja is a bad thing, but in PvP, ninjas are awesome. Ninjas come in and steal objectives out from underneath the enemy’s noses. They snatch reinforcements away from a node and send them tumbling across the map.

Ninjas are awesome. But they often don’t work alone.

Let’s open up the playbook.

Every PvPer needs to learn this one. Unlike the DPS pick, this is one where you need to be able to read the situation at a node and take one of two roles – decoy or ninja.

Let’s start with a quick discussion on flag defense.

Effective flag defense requires defenders to be alert, pay attention to their surroundings, and be aware of several different avenues of potential attack. They have to be aware of their position relative to the flag, and try to make sure that they engage any attackers far enough away from the flag to deny them access to a potential cap, but close enough to interrupt any caps that get through.

My healing druid Cynli is defending the Blacksmith in the above picture. She’s moved out about as far as I’d consider safe and still defending. She could heal any DPS on the road or approach from Farm, but not quite reach the bridge. I’ve outlined the healing range with the green line so you can see it.

The red line represents how far back I can get with Hurricane, my main flag defense tool. I try to keep the flag within view when defending at all times with the camera angle, and have hotkeyed flipping my camera around to the delete button just so I can check behind me if the flag is not in view.

As a solo defender, this is as far as I should ever get away from a flag. Right now I have visibility only to the Farm and some of the LM road – I’m not defending against the GM or ST approaches, and parachutes from LM will probably land behind my field of vision.

Your goal is to draw me even further away.

THE DECOY AND THE NINJA

Every node could be broken down into a map like this one – where is the flag, where is the graveyard, where are the lines of sight?

Most nodes have an obstruction between the flag and the graveyard, and at least two avenues of approach. That’s deliberate – if you can’t see the situation at the flag while waiting to rez, you can’t call it out to your teammates. You might be able to see someone approaching the flag, but not from all approaches.

The goal of this play is to create a distraction away from the flag, so that the defenders leave it outside of their line of sight. This is one of the times where it’s okay to not fight at the flag, but one of the only ones.

The decoys pull the defenders away from the base by making a very obvious approach. They also pause at extreme range to allow defenders a chance to 1) notice them and 2) engage them. When fighting, they pull back a bit instead of going forward.

Once the DPS are pulled away, the healers will likely follow. This is something that personally frustrates me as a healer, watching DPS tunnel vision their targets and going over the BS bridge. They’re out of range, and if I’m the solo defender, the right thing for me to do is stay right where I am.

But sometimes, even a wary defender can get pulled out of position without even realizing it. That’s what a good decoy attack should do. They should be loud, they should be inviting targets, they should look like a credible threat – or healers who have to die.

Whatever bait works, use it.

While the decoys are drawing attention away from the flag, the ninja comes in from the opposite approach. Now, it’s great if you have a stealther who can do this, but it’s not necessary at all. I think a lot of players think that they can’t ninja cap flags if they can’t stealth, and that’s just not true. It is all line of sight. In the above example, a rider coming up from the GM road may be seen from the BS graveyard, but it’s not really all that likely. If you approach from the water or parachute in from LM, you’re completely invisible to the defenders.

Use the buildings. Use the terrain. Check to see that the decoys have pulled the defenders away, and then cap that flag.

The key here is patience and communication. If you see someone on your map coming around behind a node, call out what you are doing – pulling defense off the flag – and tell them to get the flag. If you see someone pulling defense away, go in and grab it. You can even rush in past the decoys and get the flag, but your team has to know that they should switch to snares, slows, and do whatever they can to keep defenders away from you.

Every node is a little different in Arathi Basin, Battle for Gilneas, and even Eye of the Storm. This also applies to towers and bunkers in Alterac Valley, though with restricted lines of sight.

Every class can ninja cap, and every class can serve as a decoy for a ninja. All you have to do is get the defenders focused on one group of you, while another goes in and steals their node out from under them.