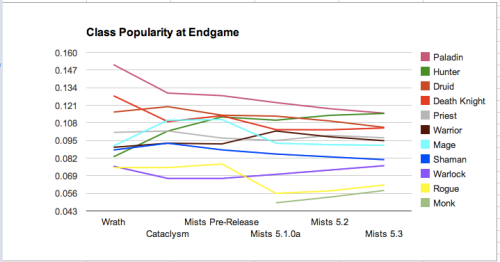 World of Warcraft’s Patch 5.3 was released on May 21st, 2013, so as with previous patches I’ve taken a snapshot of population data to provide historical analysis of class popularity trends. The methodology is unchanged from my 5.2 population analysis, so the same caveats and cautions apply here. The patch dates serve as handy labels for each snapshot, but it’s important to remember that they effectively mark the beginning of a period, not the end. The 5.2 snapshot represents data at the beginning of 5.2 – or the end of 5.1.

Like previous versions, I’ve constructed a separate spreadsheet for this patch’s data. There is one new sheet looking at the realmpop population data (instead of just popularity data) which is finally giving us a view into how players are leveling through Mists of Pandaria.

The data on the first tab is relative class popularity over time at the endgame of an expansion. There are 11 classes available in Mists, so median popularity sits at 9.09% (down from 10% from Wrath). That 9% isn’t so much a target as it is a line to keep in mind – just because Mages are currently ranked #7 with 9.15% doesn’t mean they’re unpopular – but neither are they wildly popular, either.

I think it’s important to note with this graph that it’s mixing apples and oranges a bit. The Wrath and Cataclysm data is from late in those respective expansions, when people had had time to level alts in addition to mains. Starting with the third snapshot (Mists Pre-Release) the environment shifts to those characters who received priority in leveling. Nearly a year out we’re starting to see player stables fill out a bit more, until eventually it will be an apples to apples comparison.

This intraexpansion data is interesting because I think it shows in very broad strokes a picture of which classes got leveled first, and which got leveled later. My hunch is that changes in popularity percentages here, now, are more likely to be from players leveling secondary characters/alts than from new players joining or huge flaws within a class. There are no doubt exceptions and rerolls – the Warrior spike in the 5.1 snapshot was almost definitely due to PvP dominance – but I think we are seeing more alt activity than before.

Quick comparison to the equivalent one for 5.2: 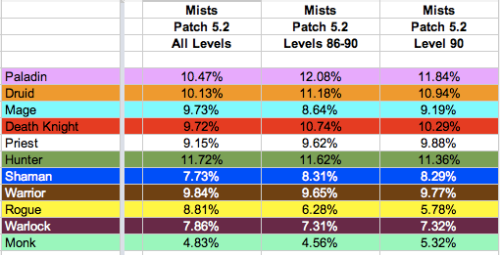 Monks have continued to take a little more of the overall pie, but the overall numbers are fairly steady. Rogues have improved a bit at level 90.

The popularity data is well and interesting, but I think there’s a more interesting way to look at the question of how players are engaging Pandaria – using population figures instead of popularity figures.

These population figures come from Realmpop, and are just the class totals for the US and EU regions added together. I’ve talked with Erorus a bit about how he gets his population sample and it reaches pretty deep. The important thing is that the methodology hasn’t changed over the course of the expansion, so by looking at the sample set of 17 million toons we can extrapolate out to general class trends. (I’d like it better if the data wasn’t missing Korea and China, but we have to work with what we have.)

Keep in mind this isn’t the total population of the game for these regions, but rather a consistent subset we can use for analysis.

I’ve been adding these population figures in since 5.1 – they’re in the hidden columns on the 5.3/5.2/5.1 base tabs – but I wanted to sit on them for a bit until we had enough data points to look at trends. So this is new, and it’s pretty neat! It’s on tab 3 in the spreadsheet.

The data is laid out in three blocks – all population, 86-89, and 90 – each showing population growth  by class across the expansion. 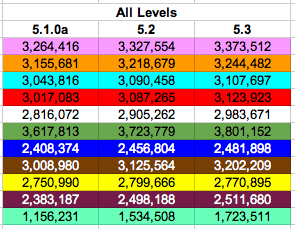 For All Levels, we can see a few interesting things about class growth and stagnancy. Over a period of time where subs have dropped by ~1.6 million subscribers, character populations have remained stable in the US/EU. Monks continue to be created, and I expect we’ll see them level off somewhere in the 2 million range by the beginning of the next expansion. Warlocks, Warriors, and Hunters have all seen some growth over the course of the expansion, while the rest of the classes are mostly stagnant.

Rogues are the only class to have a drop in figures between patches (5.2 to 5.3) and I’m not sure why.

Let’s move on to the Mists levels. 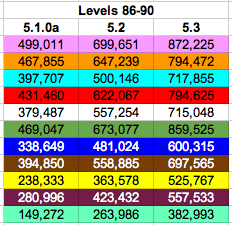 About twice as many characters are out of Cataclysm and into Mists of Pandaria right now than at the start of 5.1. Okay, it’s a little less than twice for almost everyone but Monks – 1.74x Paladins, 1.98x Warlocks, 2.56x Monks – but the population of characters in Mists content has basically doubled in 6 months.

Since the general population didn’t double, a lot of this movement has to be attributed to existing characters moving up from pre-Mists levels into Mists. How about at level 90, the endgame?

This is probably my favorite bit of data to look at. There are two components – the population increase over time, like we did before, and the percent of a class which is level 90. The first block is very similar to what we saw before at 86-90, though most classes have more than doubled their number of 90s in the sample. Druids are the furthest behind at 1.94x, everyone else has a factor of 2.1x or greater. There’s something going on there, but I’m not sure what. I think we need more data points, and someone who can evaluate how each class does in current content, to look at that – definitely not me.

The second block is amazing, though. I love it. It’s the number of 90s versus the total population of a class over time. With one exception, classes started out in a fairly predictable spread and have coalesced into one of two packs, either at 16-17% or 18-19%.  Monks started out amazingly strong – people who rolled Monks at the very beginning were motivated to get them to the endgame – but have come in line with Paladins, Death Knights, Priests, Shamans and Druids in the top pack. Mages, Hunters, and Warlocks are in a second pack a percent or two behind, which might be a result of their pure DPS roles? More incentive to level a hybrid alt, perhaps?

Warriors are stuck back with the pure DPS for reasons that I can only attribute to their being perceived as poor tanks in current Mists content. I’m speculating there, but I think it’s notable that they’re behaving like all the other hybrids.

And then there are Rogues.

At all levels, there are more Rogues than Monks, Warlocks or Shaman. There are almost as many Rogues as there are Priests! But Rogues are not making it to level 90. The 5.14% in 5.1 could be assumed to be the Rogue mains with a job to do, but even with a healthy influx of level 90s after that, they are not playing in the endgame. That 12.42% outlier result is amazing. It’s terrible, but it’s amazing.

Some of this might be due to Rogue populations swelling in late Cataclysm for the legendary daggers. A large number of leveling PvP rogues might also account for it? I’m sure that the Rogue community will have much greater insight than I over it. 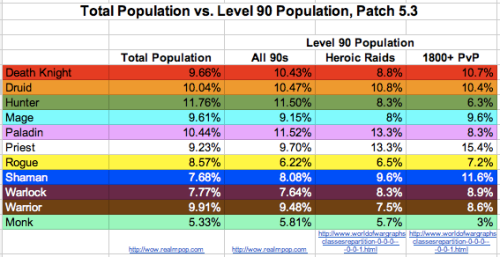 The last bit of data I want to talk about is the PvE/PvP representation data from World of Wargraphs. The basic idea behind this is that if a class is more or less represented in high-end play in one sphere or another compared to their general population trends, they may be over- or under-powered for that activity.

There are detail tabs for each spec in the spreadsheet if you want to dive into this data a bit further.

I’m not sure what to say about Hunters, to be honest. They’re a hugely popular class – more Hunters overall than Paladins, and soon to be more level 90 Hunters too – but they don’t have the same popularity in high end PvE or PvP. Is it that Hunters are fine in high end play, but simply have a larger population of casual players? Or are the problems with the class such that Hunters face problems in high end play above and beyond other classes?

I think there’s evidence to support both theories, and they are not mutually exclusive.

Warriors were the PvP darlings of 5.1 – no more. They are struggling in both PvP and PvE and it’s showing.

Monks, as the new class on the block, have done a great job catching up to the population numbers of the other classes. They may never be as popular as the big 4 (Pally, Druid, Hunter, DK) but they are likely going to carve out a niche for themselves. They are leveling well, and the only real area of concern seems to be their PvP viability. As someone who’s been leveling a Monk, I expect to see some much-needed cleanup to the class in the next expansion to make it a smoother, more coherent experience.

Hunters are the dominant class in World of Warcraft, yet they are underrepresented in high-end play. There are more Hunters than Paladins at all levels, and soon Paladins will be ever so slightly less popular than Hunters at level 90. The question of Hunter’s role in endgame play is an important one – are these population discrepancies indicating real problems in high-level rated play, or is it due to the overwhelming popularity of the class? Is it due to their pure DPS role versus the popularity of hybrids? There’s a serious discussion that needs to happen there.

Update June 5, 2013: Svelte Kumquat @ The Red Hatted Rogue has taken this data and is running with it for Rogues. He’s pulled some additional data from Realmpop about our sneaky friends.